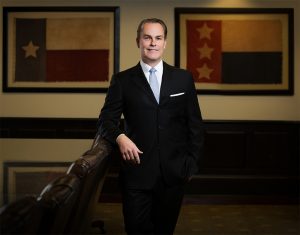 Mr. Stewart serves as Chairman of the Board and Chief Executive Officer of Texas Citizens Bank, N.A. and its parent bank holding company, Texas Citizens Bancorp, Inc. He has been Chairman of the Bank since its opening in 2006, and was named Chief Executive Officer in April of 2009.  The bank focuses on serving the financial needs of owner operated businesses. He was an attorney in the Financial Services section of Bracewell & Patterson, L.L.P. (currently Bracewell LLP) from 1993 to 2002.  At Bracewell & Patterson, he specialized in bank mergers and acquisitions, public and private capital raising for banks, bank holding company formations and other bank regulatory issues.

He has served on several other bank and bank holding company boards.  Mr. Stewart is a Co-Founder and President of ZoomBBC, Inc, a fintech company that automates the calculation of borrowing base certificates for lines of credit.  ZoomBBC was named a top 10 World Finalist in the 2016 QuickBooks Best New App of the Year Contest.  Mr. Stewart received a Bachelor of Arts in Plan II from the University of Texas at Austin and a law degree from the University of Texas School of Law. Mr. Stewart and his wife, Michelle, live in Houston and have a daughter, Caroline (25) and a son, Cullen (19).