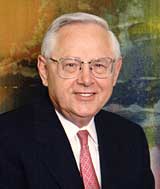 In 1977, Dr. George Kozmetsky (1917-2003) founded the IC² Institute at The University of Texas at Austin while he was Dean of the College of Business Administration and the Graduate School of Business. A lifelong educator, Dr. Kozmetsky was a co-founder and former Executive Vice President of Teledyne, Inc., Kozmetsky was awarded the National Medal of Technology in 1993 as an acknowledgment of his decades of exceptional contributions as a mentor and champion of high technology entrepreneurs including Michael Dell, Dell Computer Corporation, and Jim Truchard, National Instruments.

George Kozmetsky has had far-reaching influence in a variety of areas of endeavor related to technology and education. His contributions have resulted in employment for tens of thousands of Americans and billions of dollars of exports. He has been intimately involved in facilitating technology transfer from the public, federal, and university sector, into private enterprise. Dr. Kozmetsky has counseled, nurtured, and developed more than a hundred companies; he has helped launch them, served on their boards, assisted in identifying key personnel and niche markets, and on occasion helped finance them. His dynamic efforts resulted in the establishment within The University of Texas at Austin of the Austin Technology Incubator, which combines economic development and business education; and the Texas Capital Network, which promotes innovative financing for new ventures. His accomplishments have helped bolster our nation’s competitive position in world markets.

As a “technological ambassador,” Dr. Kozmetsky has consulted with such international institutions and companies as the USSR State Committee for Public Education, the USSR Academy of Science, the State Council on Science & Technology of the People’s Republic of China, and Mitsui & Co., Inc., in Japan.

He participated in the founding of the Graduate School of Industrial Administration at Carnegie Mellon University. At The University of Texas at Austin, where Dr. Kozmetsky was dean for sixteen years, he pioneered in educational technology and education about technology, revolutionizing the curriculum and the manner in which it was taught. His vision, his energized drive, his ability to call on the resources of major corporations throughout America, his concept of educating students by incorporating computers and technology in the classroom, and his far-reaching motivational leadership enabled him to lift the College and Graduate School of Business into the top rank in the nation. More than twenty thousand students graduated under his deanship.

Dr. Kozmetsky’s activities will have long-lasting effects as the various enterprises inspired by his technology-transfer skills and entrepreneurial spirit continue to grow. They will increase employment, creating commercial vehicles for the transfer of intellectual property held within our public institutions in the United States today.

The Future of Learning According to Dr. Kozmetsky

In the 21st century, education and training will be differentiated as follows:

education is knowledge an individual must convert to value; whereas,
training is knowledge with immediate market value.

Dr. Kozmetsky points to the failings of our current education system as instituted by his favorite president, Thomas Jefferson. Jefferson envisioned the U.S. public education system as the fountainhead of democracy. The purpose of public schools was to create civil and capable citizens. For democracy to succeed, the participation of an educated and efficacious public is required … by the people, for the people.

Public education serves mainly as a democratizing institution by providing basic knowledge and skills to all people. Thereafter, it is up to each person to use this foundation to actualize individual ambitions in the open market of opportunity.

Founded during an agricultural era, the U.S. public education system continued to function fairly well during the industrial era. But in the era of knowledge creation and technology innovation, public education cannot respond effectively to the accelerated pace of societal change for all people. Learning must become a lifelong endeavor.

1957 – Doctorate of Commercial Science from Harvard

Accepting the National Medal of Technology from President Clinton (1993)

“As a first-generation American, I find it very humbling — indeed beyond my imagination — to be given this award.

“Whatever I have accomplished is the result of being an American plus great good fortune. I had wonderful parents. I have had a wife and children who were always with me, an excellent education, wise mentors, friends who inspired and supported me, exciting entrepreneurial ventures, and the opportunity to participate in cutting-edge programs and projects that link the academic, business, and government sector for the general welfare.

“Mrs. Kozmetsky and I feel very strongly that individuals who have been so privileged ought to contribute to society. To be honored for simply being a responsible citizen is overwhelming, and I am deeply grateful.”

“George Kozmetsky’s guidance in management issues, workforce motivation, and strategies needed to remain technologically competitive has been invaluable in helping Dell Computer Corporation grow to be a more than $2 billion company — and he has done the same for many other entrepreneurs in technology. His wisdom and guidance have enabled many innovative ideas to reach fruition, directly benefiting not only their creators but also the American people at large.”

“One example of George Kozmetsky’s innovative concepts consists of his efforts to develop “smart robotics” technology for such civil applications as nuclear plant maintenance and cleanup, investigating bomb threats, and performing hazardous work. Dr. Kozmetsky has favorable influenced to an exceptional degree the US directions of technology development, technology transfer, technology commercialization, and technology in education — all of which have implications for the nations’s economic future.”

“George Kozmetsky has provided the kind of mentoring and substantive support for women that has made our entrepreneurial vision into successful reality. He has continually furthered the interests of women entrepreneurs in the area of technology. Over four decades he has educated, stimulated creative and innovative thought, assisted and motivated others in the implementation of new ideas and creation of entrepreneurial businesses.

The IC² Institute is a think and do tank at The University of Texas at Austin exploring hard problems in economic development outside of urban corridors.

Rural entrepreneurs are media omnivores advertising both digitally and locally, but often for two distinct purposes, according to new research from @wenhongchen and @JosephStraubha2 of IC2's Faculty Research Program. https://ic2.utexas.edu/zumba-facebook-and-tiktok-creative-ways-rural-texas-entrepreneurs-make-up-for-lack-of-local-media/ @UTexasMoody

The CoLab @ Dell Med is emerging as the hub for health product innovation at UT Austin. It's helping teams of UT innovators like the one at ClearCam move from discovery to impact in a new report from the BBR. http://ow.ly/9ntL50Ln7lf @UTAustin @DellMedSchool @CockrellSchool

A new report from the BBR at the IC2 Institute reveals the higher-than-expected impact Dell Medical School has made on the regional health innovation and life sciences sector in just eight years of existence. Read more https://ic2.utexas.edu/news/ @uthealthaustin @UTAustin