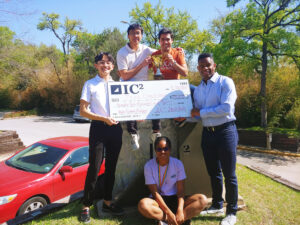 Ariel Johnson: Senior Economics and Business Honors major, with concentrations in Real Estate and German, who will be working for State Farm after graduation

Brandon Vu: Electrical and Computer Engineering Major going down a Software Engineering and Design track, who will be planning to intern at Home Depot as a software engineer in the summer.

Christian Mira: Economics and Government Major who will be doing the Archer Fellowship in the fall and working for JP Morgan Chase in the summer.

Diego Morales-Burnett: Economics and Math Major who will work for the Federal Reserve Bank in Dallas this summer.

Our solution for Corsicana and the lack of digital healthcare in its community was a two-step process. When we first heard the prompt we realized that there was already a reason to improve digital healthcare in our community based on our primary sources. We decided to build upon the foundation that Corsicana provided to start off our solution. Our first step was to create a curriculum that increased opportunity for the young people within Corsicana. It would take the second most popular major at Navarro College-nursing-and expand it to allow for one of the elective classes to be a digital health practicum. This would have the effect of expanding access because the classes are capped at a relatively small size, and all nursing majors are required to take a certain number of them. Our second prong of the solution would be to take these nursing students that are newly trained in digital health and use them to expand access and reduce the healthcare disparities between Hispanic and non-Hispanic communities. This would be by hiring culturally competent organizers who would train these people during the elective and build relationships with both the community and these nurses. As these nursing trainees cycled through, we would identify the most promising and offer them jobs at Navarro Hospital and use it as the hub to enact change in the broader rural area surrounding Corsicana. This is because it is not only Corsicana, but the surrounding rural areas that have greater than Texas or national average in mortality, and heart disease. This all adds up to a lower than average life span. Several studies have shown, including at the nearby Texas A&M, that creating these digital healthcare hubs can reduce those healthcare disparities. By utilizing resources we already have, and matching supply with demand–young people that want high paying jobs in a community that needs more competent care, we created a unique solution that took advantage of Corsicana’s strengths and deftly addressed Corsicana’s weaknesses for very little out of pocket expense that is not covered by corresponding revenue, while growing the economy of Corsicana.

Impact of the Experience:

“This competition made me realize that solving a community’s problems takes more than just resources. It takes an understanding of the people that live in a community and time. Speaking with the people in the community of Corsicana helped us find and come up with both of our solutions to the problem prompts. One experience that I (Brandon) remember is asking Stacey, an employee at Dawson and Sodd, about her experiences living in a community like Corsicana and what she dislike and liked about it. She went on to tell me about how the main hospital in Corsicana, Navarro Regional Hospital was not particularly trusted by most of the communities because of the lack of medical personnel and urgency to serve the community. This led us to realize there was a problem with the healthcare in this community and build our solution to the prompt given.” – Brandon

“One interesting thing that occurred in the first round, is that I (Ariel) had competed in the inaugural IC^2 Economic Competition when our prompt was very similar to the first round. It centered around broadband when our first prompt this round was digital infrastructure. It offered the opportunity to build upon what I had learned in the previous round, and learn that it is not enough to come up with a sound economic solution, it must also take into mind the community and leverage the resources that are already in place. That is one reason why we looked so hard for the money they were already given/already spending and tried to use them in addition to the funds allotted in the prompt.” – Ariel

“Rural communities are beds of untapped potential. With the right attention and collaboration, many rural communities can be just as attractive as the busiest metropolitan areas. This was something that I understood in theory but it wasn’t until I was tested through March Economic Madness that I could see it in practice. Through our research process, my team could see how Corsicana’s attractive culture was stunted by barriers to high-speed internet and telehealth services. It took diligence and community-conscious thinking to see that Corsicana had the capabilities to capitalize on its local assets and remove these barriers. This is the story of many rural cities and I’m glad to have participated in a project that focuses on tapping into the potential of rural communities.” – Christian