A new report prepared by the Bureau of Business Research for the Texas State Library and Archives Commission (TSLAC) has found that Texas public libraries provide $2.628 billion in economic benefits to the state. 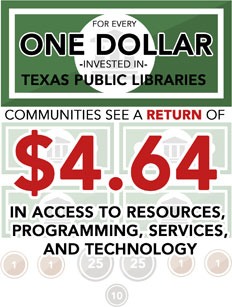 Collectively, in FY 2015, Texas public libraries were found to offer a sizeable return on investment. For every one dollar spent, libraries offered $4.64 worth of services, resources, and economic opportunity to communities.

The findings are consistent with a previous BBR study which found an economic return in FY 2011 of $4.42 for every dollar spent on libraries.

Another major component of the study analyzed key services offered by most public libraries in the state. BBR found that libraries contributed an additional $1.652 billion worth of services, including educational programming, internet and computer access, electronic databases, circulation of materials, reference services, in-library use of books, volunteer opportunities, and wireless access.

The study used a conservative approach and valued public libraries purely as business and organizational entities. Researchers used extensive databases from the Texas State Library and Archives Commission in conjunction with input-out economic modeling software. The research found that, while Texas public libraries cost $566 million in FY 15, those libraries provided a return on investment of $4.64 for each of those dollars spent.