Recent appearances by IC² Institute personnel in the media.

– Marco Bravo of the IC² Institute spoke with the French food and wine accelerator 33entrepreneurs about his work helping great ideas and great entrepreneurs go global.

– An op-ed from ATI Clean Energy co-director Michael E. Webber on what the Iran deal means for Texas oil producers appeared in newspapers across the state. 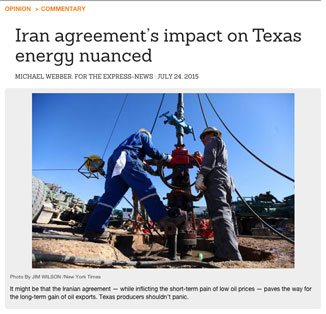 – Webber was also quoted in a Dallas Morning News piece on the state of technology enabling consumers to get off the grid. “Distributed generation is already in California. It’s not the future; it’s real,” said Webber. “Instead of building large power plants, we’ll install solar panels and battery systems. It’s not today, but 10 years from now it will be.”