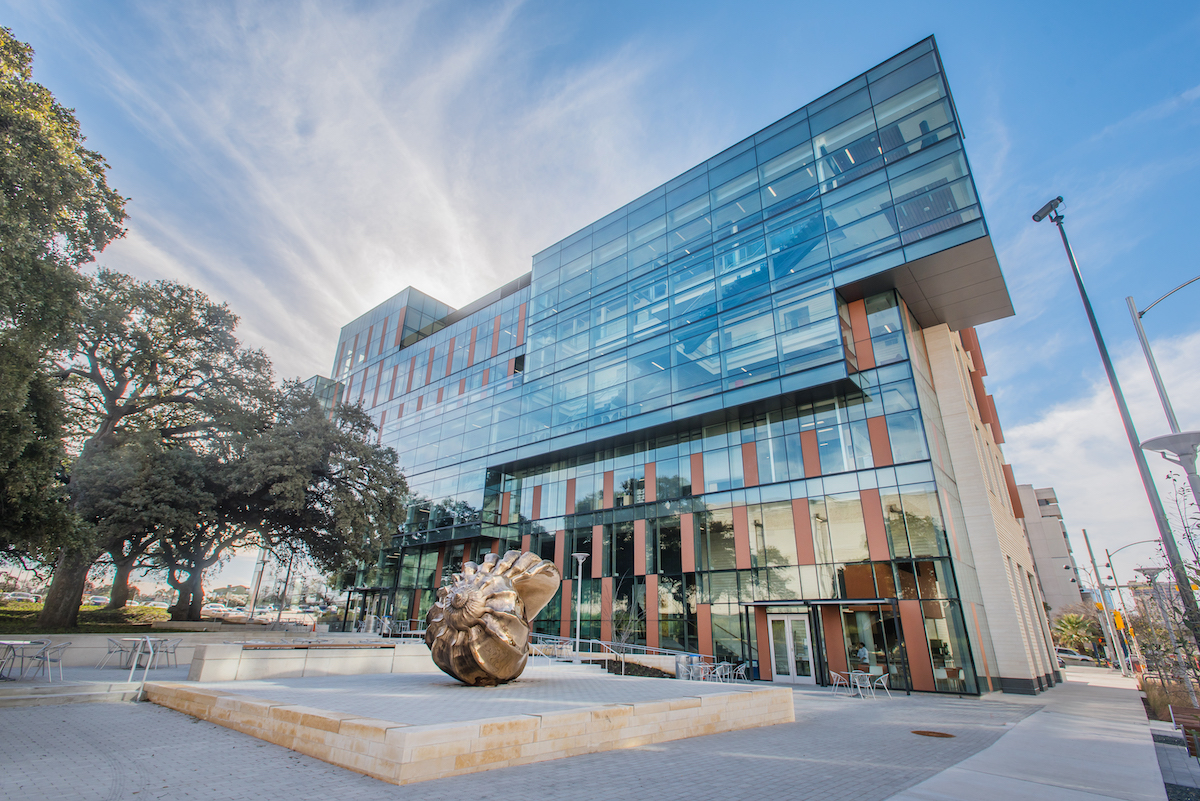 Since its launch in 2014, Dell Medical School at The University of Texas at Austin is already having a higher-than-expected impact on the regional health innovation and life sciences sector – from new research and inventions to catalyzing UT campus collaborations and commercialization – according to a new report from the Bureau of Business Research (BBR), an organized research unit of the IC2 Institute at UT Austin.

“In the context of a medical school that is still ramping up, Dell Med’s collective accomplishments in the research and commercialization space are notable and impactful, evidenced by the numbers,” said Greg Pogue, deputy executive director at the IC² Institute and one of the report’s authors. “This report takes that collective and early impact into account, and also puts a sharper focus on commercialization as one example of success.”

Among the report’s highlights, including overall research and data from commercialization efforts from 2015-2021:

“Among the key takeaways, evident in examples such as a higher-than-expected number of invention disclosures, is Dell Med’s success initiating cross-campus collaborations,” said Pogue. “The type of researchers that the medical school is attracting and the culture of collaboration it is working to build – clearly among Dell Med’s strengths – provide a solid foundation to further expand partnerships with UT Austin innovators, as well as with industry and other community partners.”

A commercialization-focused case study highlights the CoLab @ Dell Med, which the medical school describes as the hub for health product innovation at UT Austin. The CoLab’s unique, three-step approach to product innovation includes Texas Health Catalyst, a collaborative initiative with the Cockrell School of Engineering, College of Natural Sciences, College of Pharmacy and Discovery to Impact at UT Austin.

With support from a team of more than 300 expert advisors, UT collaborators and industry partners, Texas Health Catalyst has helped to launch 14 companies, has nine products in clinical testing and has facilitated more than 5,000 hours of mentor advising to UT teams. Additionally, the report notes that $800k in seed funding has generated more than $49M in follow-on funding for UT health innovators – translating to $61 in next-stage funding for each dollar invested.

One example of success is ClearCam, a company that develops technology to improve a surgeon’s visual field during surgical procedures. It was an idea that launched one of the first collaborations between a faculty physician at Dell Med and a partner from another UT college or school, in this case an engineer from the 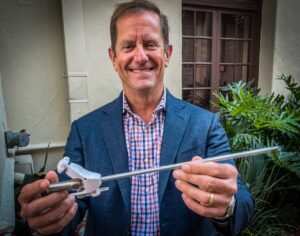 ClearCam co-inventor and CEO Dr. John Uecker, who is also a professor of Surgery and Perioperative Care at Dell Med holds an in-vivo cleaner built to assist in laparoscopic surgery.

The collaborators identified a clinical unmet need and a commercially attractive solution, and in 2018, ClearCam was selected to participate in Texas Health Catalyst’s consulting award phase that provides customized input and guidance from a team of clinicians and industry experts.

“When we started out, our team had specialized knowledge of clinical environments and engineering, but there were so many other challenges on the commercialization path that would’ve been difficult – if not impossible – to overcome without this kind of support,” said ClearCam co-inventor and CEO John Uecker, M.D., who is also a professor of Surgery and Perioperative Care at Dell Med. “Not only does UT have the people coming up with big ideas, and deep wells of expertise at its schools of medicine and engineering, it also has a support system in place to help make us successful.”

“The ClearCam product started out as a compelling idea to solve a real clinical problem, and now it’s in the market,” said Ruben Rathnasingham, Ph.D., Dell Med’s assistant dean for health product innovation and managing director of the CoLab. “Building on support from partners like UT’s Cockrell School and Discovery to Impact, we were able to help the team successfully navigate the complex process of commercialization. This kind of cross-campus collaboration is a critical part Dell Med’s mission to revolutionize how people get and stay healthy.”

In the context of UT Austin’s 10-year strategic plan, and the goal of being the world’s highest-impact public research university, making an impact on the life sciences in Austin and beyond is a priority.

“Specialized initiatives like the CoLab @ Dell Med are part of a comprehensive support network at UT Austin aiming to advance innovation and commercialization that leads to enduring societal impact,” said Christine Dixon Thiesing, the university’s associate vice president for Discovery to Impact.

“It’s also a good example of what impact looks like – identifying early-stage ideas and innovations that address a market need; catalyzing and supporting collaborations between world-class experts from across disciplines; giving innovators the resources and guidance they need to successfully navigate the commercialization process; and validating the market pull for new innovations by significant industry stakeholders,” she said.

For media inquiries about the report, contact Gregory Pogue, Ph.D. at gpogue@ic2.utexas.edu.