Beginning in the first week of October 2012, the IC² Institute will provide a second and extended edition of its technology commercialization training funded by Ruta N in Medellín, Colombia, the Extended Practical Training in Commercialization Program (EPTCP). 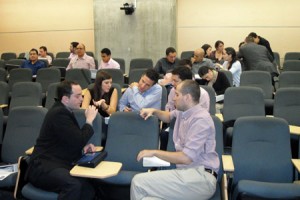 The EPTCP has three major components: (1) seven weeks (8 hours of classes on Thu/Fri) of technology commercialization training in Medellín and six weeks of long-distance assistance training; (2) inclusion of six mentors already trained in the previous edition of the program, the PTCP; and (3) the possibility for a two-week internship at the IC² Institute in Austin for the winning team and the participation in an Advanced Innovation Program in Austin for the mentors with highest review scores.

The program has 14 sessions in which 10 instructors and 6 mentors will train 10 teams of 40 people total in the topics such as: technology quick look assessment, technology marketing and proposal persuasion, intellectual property, technology valuation and business deals, commercialization plan and how to pitch a technology business in front of different audiences.

Dr. Elsie Echeverri-Carroll is Principal Investigator for the EPTPC project. 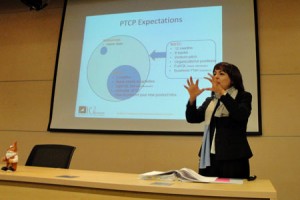 Ruta N is a non-profit organization dedicated to promoting science, technology, and innovation to increase the competitiveness of the city of Medellín. It is part of Empresas Públicas de Medellín (EPM), a utility and telecommunications provider and the second-largest Colombian company in terms of income and assets.

Medellín is the first city in Colombia, and probably in Latin America, to have developed a science and technology plan, the Plan CTi. One of the objectives of the Plan CTi is to strengthen technology commercialization in Medellín.