Commentary by Matthew Kammer-Kerwick and Robert A. Peterson

Six years after the Great Recession ended, the nation’s economic recovery remains tenuous: the hiring rate has weakened, the manufacturing sector continues its rapid decline, and the labor force has shrunk to its lowest level since the 1970s. Nobody has felt this sluggishness more than Millennials, who are facing lower incomes and higher unemployment than their parents did at their age.

That’s a big problem: Projected to be 75 percent of the global workforce by 2025, Millennials are the key to a sustainable economic recovery. But the leaders orchestrating our economy’s turnaround keep overlooking them and failing to cultivate their full economic potential.

Millennials have made clear how they want to help rebuild our economy. Survey after survey after survey has shown that the nation’s youngest workers have a hungry entrepreneurial spirit, driven by the opportunity for independence and creativity. A recent study by Bentley University found that most young adults dream of starting their own businesses: “Millennials view career success differently than their parents do. Rather than striving for the CEO spot, 66 percent of Millennials would like to start their own business.”

Despite their dreams of becoming business owners, few Millennials actually do: Just 3.6 percent of households headed by young adults own stakes in private companies, compared to 10.6 percent in 1989, according to a recent Wall Street Journal analysis. The future of our economy depends on finding a way to shrink that chasm between having an idea and having a business.

Cultivating entrepreneurs is great for the economy because the new firms they create are a prominent source of jobs growth and entrepreneurs drive innovation. Washington understands that. This summer, the Obama administration will hold the first White House Demo Day, billed as an effort to make entrepreneurship more accessible to people from diverse backgrounds and geographies. This broad, inclusive goal is positive. But the White House has made it clear that its focus is actually much narrower.

When it comes to celebrating entrepreneurship, our society, led by Washington and Wall Street, has become fixated on the technology industry, funneling money and support primarily into tech startups. That myopic focus is misguided. In contrast, most aspiring entrepreneurs dream about starting Main Street companies, such as those in retail and services.

The timing is perfect to capture the economic promise of millennial entrepreneurism. The oldest members of the generation are reaching what has historically been the prime entrepreneurial age, at a time that coincides with improving economic conditions and renewed optimism. Relative to the climate for Main Street start-ups, consumers are less worried about financial challenges than they were 2 or 3 years ago and interest rates have remained low.

Of course, the entrepreneurial process is complicated and fraught with risk: Hopeful business owners must turn their visions into solid business plans, assess the market, determine how much capital they need and find backers, before they can even launch. After that, it gets even harder. Data from the Bureau of Labor Statistics show that approximately half of startup companies fail to last more than five years. These are among the hurdles that have prevented many young people from becoming their own bosses.

For this generation — already saddled with debt and struggling to get the private-sector experience that helps one launch a business — the risk can be especially intimidating. Additionally, historically speaking, the main street companies desired by aspiring entrepreneurs are among the more risky. Although as a group, they are less risky than technology startups, main street companies are often underfunded and poorly planned. In the absence of funding and planning, they are driven by passion.

What is emerging then is a confluence of underfunded, under planned, passionate desire for entrepreneurial activity, and that’s why government and other institutions need to step up. First, universities and companies should be expanding their educational and support programs by directing them toward young entrepreneurs after their college years, and to do so in a way that does more to assists Main Street entrepreneur.

Going forward, as a nation, we should enhance connections between Millennials and more experienced entrepreneurs as partners and mentors. This can be accomplished by enhancing the mentorship programming like that seen at recent events such as New Orleans Entrepreneur Week and South by Southwest, both of which have made efforts in this direction that can be built upon. Examples from these programs include summits and showcases for food, veteran, arts, and other culturally focused entrepreneurship as well as mentoring sessions that accompany their programming.

Such events can also be used to increase awareness of and knowledge about existing financing options and startup support programs, especially among Millennials who, as nascent entrepreneurs, may otherwise take easier, more obvious and riskier routes by using credit cards and relatives. Although expedient for the passion driven entrepreneur, the very business planning process required by other funding options reduces the financial risks and potential sources of stress during the startup process.

Finally, and perhaps most importantly, we must demystify the startup process. One step in this direction would be the development by leading entrepreneurial educators of materials that encourage main street entrepreneurs to plan and fund their companies at a level that reduces risk.

Babson College is an excellent example of an existing program that could be expanded; their program requires students to gain startup experience on a small scale as part of their course work. The University of Houston is another great example of how education can include hands-on experience along with traditional classroom learning. The University of Texas at Austin, in addition to offering formal entrepreneurship-related courses, offers a variety of entrepreneurship programs for students, including Texas Venture Labs, Longhorn Startup, Longhorn Entrepreneur Agency, and the Technology Entrepreneurship Society. We should build on such programs to facilitate the aspirations of entrepreneurs whose passion is activated a few years after their formal education is over.

With focused, hands-on training these entrepreneurial intentions can be translated into action through short courses, part-time education, or mentoring programs tailored after existing curriculum. The goal should be to get aspiring entrepreneurs to think a little bigger and a little more formally as they develop a plan to pursue their passion, but not have them stall because they don’t yet have the acumen to engage angel investors or venture capitalist partners.

Such expanded adult educational programs need not focus solely on aspiring entrepreneurs in their 30s. While Millennials are often characterized as highly entrepreneurial, members of the Generation X and Boomer generations also have substantial interest in entrepreneurship and have more experience. An analysis of the Kauffman Firm Survey has shown that experience in the industry where an entrepreneur starts a company is more important to success than pervious entrepreneurial activity.

Attitudinally, Millennials and older Americans share common beliefs as well as hold a few marginally divergent views about the economy and the opportunities they face. A recent study that we conducted found that Millennials, compared to older Americans, are more likely to be thinking about entrepreneurship. In terms of serious thinking about a startup, setting professional entrepreneurial goals, and having formed some idea about the type of company they would start, Millennials do outpace older Americans by approximately 10 percentage points on all measures.

But there are synergies available with a broader approach to transgenerational mentorship and even business partnership. Both groups share the same levels of optimism and equally associate success in entrepreneurship with a good work ethic, being analytical, and being able to delegate.

Compared to Generation X and Baby Boomers, more Millennials are confident about setting goals, believe they have gotten the important things in life, want to make a difference in society, and believe economic conditions are improving.

In contrast, Generation X and Baby Boomers are marginally more likely to value the importance of persistence in recovering from setbacks, enjoying job security, having reliable health insurance, and having retirement savings. Generation X and Baby Boomers are also marginally more likely than Millennials to view a college education as indispensable for career advancement.

The consequences of inaction are a less robust and less diversified economic recovery, and one in which fewer Americans pursue their entrepreneurial dreams. Such inaction is akin to inadequate planning for retirement. At this point in our tenuous recovery, now is exactly the best opportunity to invest in a diversified and inclusive portfolio of entrepreneurs.

A version of this op-ed appeared in the Washington Post. 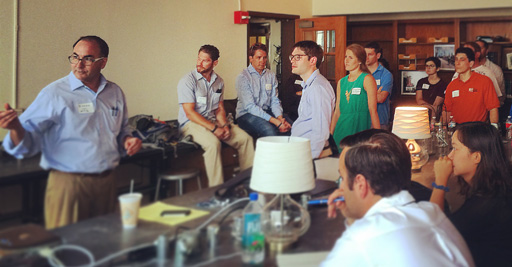 Participants in the Student Entrepreneur Acceleration and Launch (SEAL) program, the UT summer accelerator run by the Austin Technology Incubator and the IC² Institute.