Dr. Fred Phillips, Distinguished Professor at Yuan Ze University’s College of Management and Visiting Professor at SUNY Stony Brook’s College of Engineering and Applied Sciences, received the 2017 N. D. Kondratieff Medal (Gold) from the Russian Academy of Sciences. The Academy issues the prize every three years to a scholar who has made signal contributions to the social sciences. The medal, like the N.D. Kondratieff Foundation that administers it, is named for a pioneering Russian economist (1892-1938) who by identifying the “long wave” economic cycles inspired the later work of Joseph Schumpeter and Simon Kuznets.

Phillips accepted the medal and delivered the laureate lecture on September 25 at a ceremony in Moscow.

Phillips earned the PhD at The University of Texas at Austin and has been an IC² Fellow since 1984. He has enjoyed a global career, teaching at UT Austin, Oregon Graduate Institute of Science & Technology, Maastricht School of Management, Yuan Ze University in Taiwan, and Stony Brook’s program in Korea. He is editor in chief of Elsevier’s 50-year-old international journal Technological Forecasting & Social Change, which has published approximately 300 works by Kondratieff scholars.

Fred Phillips can be reached at fred.phillips@stonybrook.edu. 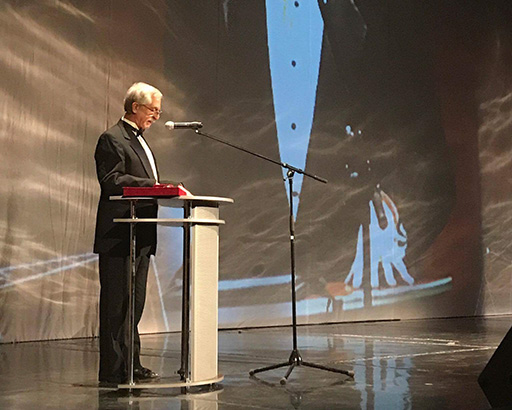