In September, IC²’s Richard Amato served as a judge and panel moderator at HATCH! FAIR, Vietnam’s largest entrepreneurial conference and start-up exhibition. The panel discussion focused on entrepreneurship within universities and featured several leading university professors and investors from Hanoi who are driving incubation and entrepreneurship for the students.

Richard’s participation was an outgrowth of his work at the Vietnam Climate Innovation Center. VCIC is one of seven similar centers funded by the World Bank in order to develop sustainable industries in developing nations by commercializing locally relevant technologies in the clean-tech/climate space. Richard and the IC² Institute have been actively engaged since 2015 in supporting CICs in four of the seven countries in the program: Vietnam, Ghana, Kenya, and South Africa. Now in its second year, the Vietnam CIC has incubated 39 companies to date. 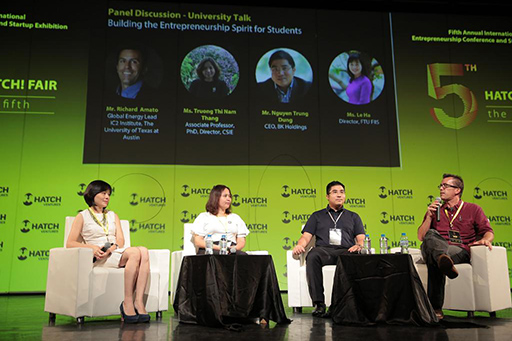