A Civic Entrepreneur: The Life of Technology Visionary George Kozmetsky 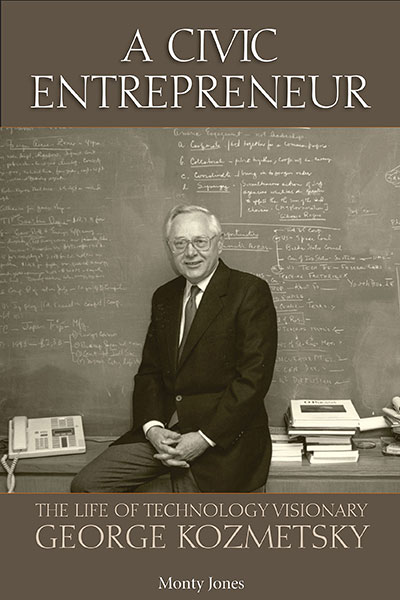 This biography details the life and career of George Kozmetsky, the founder of the IC² Institute.

Throughout his career as an industrialist, educator, visionary supporter of new technologies, advocate for worldwide economic development, and philanthropist, George Kozmetsky promoted constructive interactions among the worlds of academia, government, and private-sector business. He personified these interactions as a founder of Teledyne, a dean of the business school at the University of Texas at Austin, an academic researcher at the university’s IC² Institute, a promoter of new technologies, and a consultant to entrepreneurs and government agencies.

In this comprehensive biography, Monty Jones details all aspects of Kozmetsky’s life, from his childhood as the son of Russian immigrants, to his service in World War II, to his accomplishments in technology, education, and business. While Kozmetsky is most widely known for taking early steps to propel the business school at The University of Texas at Austin toward its current position as an internationally prominent institution and for playing a central role in the economic transformation of Austin from a sleepy college town to its present-day status as a center of high-technology research, development, and manufacturing, Jones also details Kozmetsky’s technology career, influence, and philosophy. Kozmetsky embodied the concept of “civic entrepreneurship,” which involves a merging of business acumen, a deep commitment to social responsibility, and visionary leadership for a community’s economic development. Inherent in Kozmetsky’s role as a civic entrepreneur was the broadest possible definition of “community,” beginning with one’s city and region but growing outward to encompass the globe.