The Texas Way: Money, Power, Politics, and Ambition at the University 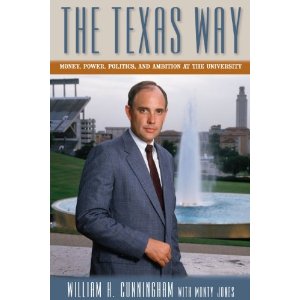 This engaging memoir details Bill Cunningham’s seven years as president of the University of Texas at Austin and his eight years as chancellor of the UT System. Along the way, he relates accounts of the important issues UT faced during that time, including fraternity hazing, affirmative action, the demise of the Southwest Conference and the creation of the Big 12, apartheid and divestment protests, the future of higher education in Texas, and many other issues.

The Texas Way outlines how money, power, politics, and ambition all play roles in the business of running the state’s premier university system, particularly in its relations with the state government. As president and then as chancellor, Cunningham dealt with conflict from all sides of the political spectrum, always striving to protect the university’s interests.

Bill Cunningham was at the center of many important issues during the fifteen years he served as president and chancellor. The Dolph Briscoe Center for American History at the University of Texas at Austin is pleased to publish Cunningham’s detailed and insightful memoir, which serves as a reminder of how these issues continue to resonate and affect higher education in Texas.