Building on their 2016 study that looked at prevalence and economic impact of human trafficking in Texas, the Bureau of Business Research (BBR) and the Institute on Domestic Violence and Sexual Assault (IDVSA) have released a new study focused on child sex trafficking in the state. The report finds that victims are not adequately identified, enter and exit victimization multiple times, and spend much of their lives being exploited. 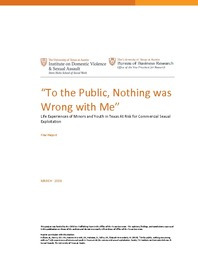 The research – sponsored by the office of Gov. Greg Abbott – finds that the paths into and out of child sex trafficking are complex and that there is an enduring need for services among survivors in addition to a need for more effective prevention methods.

“Victims are not who we typically think of when we conjure images of the sex trafficked child or youth – that of a young woman taken by a stranger and locked away,” according to Bruce Kellison, principal investigator and BBR director, as well as co-director of IDVSA in the Steve Hicks School of Social Work.

Instead, said Kellison, these children and youths are among the most vulnerable kids in our communities: youths who are homeless or have run away; kids and young adults who have already been abused or neglected; and kids who for one reason or another have been identified by social service providers.

“Traffickers are drawn to vulnerable kids of all genders and exploit them,” added Kellison. “Sometimes it’s someone the child already knows and trusts. Other times, it’s someone who offers them a way to fill basic needs the child lacks, like food, housing and clothing.”

The report, which was officially submitted to Abbott’s office this week, provides guidance to policymakers, service providers and law enforcement officials as they seek to strengthen the safety net for at-risk youths and prevent trafficking with recommendations for specific prevention and intervention models. The study empirically supports the experiences of those who have been working directly with minor and youth victims.

The study finds that youths often enter and exit various levels of exploitation and trafficking numerous times and continually assess the price of leaving versus staying “in the life.”

“We recognize that law enforcement, legislators and advocates are all on the right side of this issue; they are working hard for victims and to hold offenders accountable. We have an opportunity with this study because it sheds light and provides context and nuance on the need to protect children who are at risk of being exploited for commercial sex from those who would take advantage of their vulnerability,” said Noël Busch-Armendariz, director of IDVSA and co-principal investigator. “By applying what we have learned in this study and expanding prevention and intervention models, we can put an end to tragic missed opportunities.”

“This research provides us with additional data about the experiences of child sex trafficking survivors in Texas,” said Andrea Sparks, director of Governor Abbott’s Child Sex Trafficking Team. “Listening to survivors is essential to improving the strategies we use to prevent victimization, recognize exploitation, and intervene to provide services and help bring justice.”

What differs among regions are the services available. Some have well-integrated levels of care that range from drop-in centers for homeless youths, to shelters and residential centers for identified victims. Other regions, such as the Rio Grande Valley, need more resources and greater cultural competency to understand the needs of at-risk youths in the area.

The study explores the life experiences of survivors of child sex trafficking in three regions of Texas: Houston, Lubbock and along the Texas-Mexico border. A total of 466 research participants were interviewed from among at-risk community segments.

From that group, 71 participants indicated they were exploited for commercial sex before the age of 18 — with the average age of first victimization being 15 — and 46 of them agreed to be interviewed in-depth about their experiences entering, exiting and during their exploitation.

A majority of the 46 children and youths had interacted at some point with social service providers and systems tasked with keeping them safe but had not been identified at the time as victims of trafficking and exploitation.