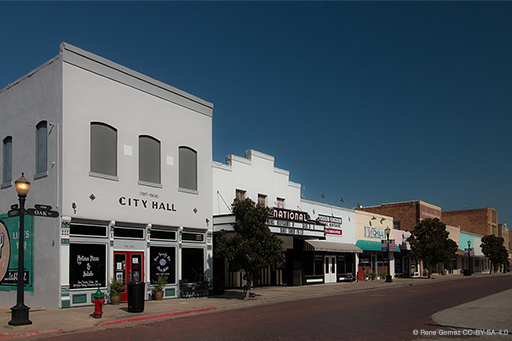 The IC² Institute announces a grant solicitation supporting research by UT Austin faculty on the theme “Innovation and Entrepreneurial Ecosystems in Rural and Small City Environments.” The submission deadline is March 29, 2019.

The new IC² Institute grant solicitation provides funds supporting research collaborations to tenured and tenure-track faculty at The University of Texas at Austin to accelerate research in the areas of innovation and entrepreneurial ecosystems in rural or small city environments.

IC² anticipates funding six to eight research projects of $100,000 over 24 months in an ongoing effort to stimulate research by faculty across all disciplines at UT Austin focused on key topics of interest to the Institute.

Results from these projects will be presented at an IC² Institute-sponsored conference in spring 2021.

Applications must be submitted online via InfoReady Review (https://utexas.infoready4.com/#competitionDetail/1782746) by Friday, March 29, 2019. Specific application procedures and submission and reporting requirements are detailed in the RFP.

Why rural and small city entrepreneurship?

The sociological and economic gaps between rural and urban communities have grown significantly in the United States and the world. As late at 1940, almost 45% of the U.S. population lived in rural regions. Urbanization has decreased this percentage to <20% as of 2019, exacerbating the existing social, economic and opportunity divide between rural and urban regions. The urban and rural gap may be described by population shifts, but the impact cuts across the fabric of society, creating sociological and economic divisions leading to political discord, technological inequity, disparity in economic participation/reward, disproportional disease prevalence, and poor allocation and use of natural resources. These issues are not just in the U.S. but are shared with the world. In 2018, >55% of the world’s population lives in urban areas. The hyper-urbanization trend is expected to continue in the coming decades increasing the urban living population to 68% by 2050, compounding current city challenges and introducing new ones in virtually all countries.

As noted in recent reports to the U.S. Congress and other published studies, the economic and opportunity gap has widened between rural and urban communities across the United States since the Great Recession. In the U.S., the economic shock of the recession hit rural counties and states harder than those dominated by urban communities with many rural areas having yet to fully recover. For example, employment in urban areas normalized to pre-recession levels by 2013, whereas rural job growth continued to lag pre-recession levels in 2017. Further, sluggish wage growth of 3.8% in rural areas is outstripped by the >5.5% growth in metropolitan areas. This can be dramatically observed in Texas when reviewing data from the U.S. Office of Management and Budget. According to the 2010 census, per capita income is also about $3,000 less in the 191 Texas counties classified as rural than in the 63 non-rural counties. Indeed, the 18 most heavily urbanized counties in Texas have a per capita income almost $5,000 more than the remaining 236 counties in the state.

The dramatic loss of jobs from 2008-2010, the income gap, and the slow recovery of high-paying jobs in rural regions have led many residents to migrate to urban environments to find new opportunities. This migration has exacerbated the decline in rural population and supported significant urban population growth since 2010 and attendant infrastructure overuse and overcrowding. Rural population decline is compounded by the geographic remoteness of communities and lack of online connectivity (39% of rural residents lack access to broadband compared to only 4% of urban residents). Further, underinvestment in rural infrastructure impairs travel as roads, bridges and water infrastructure require urgent repair to facilitate efficient transport across these regions. Limited virtual connectivity coupled with physical distance restricts business communications and increases the costs of logistics and transportation, reducing company investments in rural regions.

Most rural economies are structured to support a single or a small cluster of industries and are usually dependent on the value of natural and agricultural resources in the region. The lack of economic diversification makes rural communities more vulnerable to the impact of individual company decisions, macro-economic shocks and the growing trend of technological displacement. Recent natural disasters in the Coastal Bend region of Texas have further revealed the fragility of rural and isolated city economies to such perturbations.

The growing societal focus on technology, robotics, data and artificial intelligence of the new economy is expected to create further distance between rural and urban communities. The gap in higher education graduates, often viewed as a prerequisite for participation in the new economy, has grown by 25% between rural and communities from 2000-2016. Lower educational attainment and population decline combine to restrict the number of individuals available to respond to government grant applications, receive new federal funds or create new cutting-edge businesses at the same rate as in urban areas.

As rural society, agricultural products and natural resources contribute greatly to the U.S. culture and economy, action is required to remove these disadvantages from rural economies and create new models and incentives for rural communities to thrive and grow. This is especially true in Texas where rural regions make up a dominant part of its land mass and local governments. Economic development in rural regions is a high priority in Texas, as it is for many other midwestern and southern states – not to mention many other developing nations whose rural population far exceeds that of the U.S.

Entrepreneurship is a core backbone of economic development. The University of Texas at Austin has long been a home for scholars whose research explores business development and it continues to have strength in this area. The number of scholars across campus involved in the IC² Institute, the McCombs Entrepreneurship Minor, the Herb Kelleher Center, the RGK Center, the Bridging Disciplines Programs on entrepreneurship, and the many groups on campus that are part of the Entrepreneurship Coordination Committee all attest to the vibrant community of research around the topic of entrepreneurship on campus. The IC² Institute aims to galvanize this community of scholars to focus on the challenges and prospects for developing business ecosystems in rural areas and small, isolated cities.

Why the IC² Institute?

This research focus fits in with the IC² Institute’s long history of research and practical engagement in the economic development of urban, rural and small city environments. In the past 25 years IC² has conducted 29 regional economic studies across the world, including ten in Texas alone, reviewing the innovation and economic growth strategies of urban and rural regions and providing detailed case studies illustrating rural/urban challenges. Based on IC²’s groundbreaking research on the Austin entrepreneurial ecosystem in the 1980s and 90s, the Austin Model was defined and subsequently disseminated across the U.S. and 43 countries around the world. This model is based on the diffusion of knowledge from science and technology centers into economic practice of regions through technology transfer and entrepreneurship. The leadership of Austin as a technology and entrepreneurship hub is widely recognized and IC² will follow the pattern of its founder, Dr. George Kozmetsky, to identify new, unstructured problems of world importance to study and engage solutions. Toward this end, IC² has since completed numerous benchmarking studies in rural and isolated cities in Texas, including the Rio Grande Valley, San Angelo, and Waco, as well as other regions in the U.S., Europe, Latin America and Asia. In addition, IC²’s Bureau of Business Research has a rich legacy of economic research in all regions of Texas going back to the 1920s. A new model for economic development based on innovation is required for rural and small, isolated cities. Our new research initiative seeks to catalyze new studies to define improved and fitted strategies to improve the competitiveness of these regions.

This solicitation follows the successful Insight to Innovation Grant Program conducted between 2017-2018. Eleven grants were provided to UT Austin faculty which engaged over 10 student researchers at UT Austin, produced many peer-reviewed publications and a number of others in preparation or under review, and supported a wealth of scholarly presentations. Further, student-led investigations were conducted in Nepal and Japan through UT courses supported by Insight to Innovation grants.