Bureau of Business Research Director Bruce Kellison and Research Scientist Matt Kammer-Kerwick were co-Principal Investigators on a groundbreaking campus climate survey of students at 13 UT System universities released this month that explored the prevalence of sexual assault and misconduct. The project, a collaboration between UT Austin’s Institute on Domestic Violence and Sexual Assault (IDVSA) and the BBR, is a multi-year effort to understand the prevalence of campus sexual assault and its economic effects on students.

For the initial climate survey, Dr. Kammer-Kerwick helped design the survey instrument, built the database of survey responses, and led the research team in analyzing the data. While the climate survey results contain some of the economic impacts felt by student victims, the more detailed series of on-campus interviews and focus groups and a four-year cohort study of UT Austin students are expected to reveal more qualitative and quantitative information on the costs borne by student survivors in the next phase of the research. 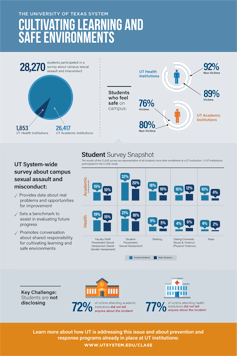 The Cultivating Learning and Safe Environments (CLASE) report is the most in-depth survey of sexual assault and misconduct ever undertaken by an institution or system of higher education in the U.S. Thirteen of the UT System’s 14 institutions participated in the survey in fall 2015 and early spring 2016. UT Health Northeast was exempted because it does not enroll enough students to protect their anonymity.

The full report, including an executive summary and an explanation of the study methodology is posted on the UT System’s CLASE website.

The study is groundbreaking because it 1) uses both qualitative and quantitative research data to better understand, address and reduce acts of sexual harassment, stalking, dating/domestic abuse and violence and unwanted sexual contact on UT campuses; and 2) includes a longitudinal component in which researchers will repeatedly survey a select cohort of students to help understand their knowledge, attitudes and experiences over the course of their college careers.

“If we want to understand and continuously improve our campus culture in order to facilitate student success, then we have to be open and honest about our students’ experiences beyond the classroom, no matter how uncomfortable it is,” McRaven said. “I’m pleased that UT institutions have numerous, effective programs to serve victims of sexual assault and misconduct, and with new knowledge, we can and must do better. The findings of this study shine a brighter light on sexual assault and misconduct that affects UT students and give us a deeper understanding of how to address these problems.”

Students were asked to respond to questions based on their experiences since they became a UT student. Questions provided specific criteria for behaviors that constituted an act of sexual assault or misconduct.

Because sexual assault and misconduct often go unreported, particularly among college students, it’s critical to understand the extent of the problem, said Busch-Armendariz, an expert in interpersonal violence who also serves as UT Austin’s associate vice president for research.

“This research helps lift the cloud of silence that exists around these issues across the nation,” she said. “The CLASE findings equip UT institutions with a deeper understanding of all students’ experiences as well as how to take action around these complex issues, regardless of where these incidents occurred. The goal is to arm institutions with information so they can continue to improve the safety and well-being of students and remove barriers that stand in the way of educational goals.”

According to the results of the CLASE survey, the prevalence rates of various types of victimization are comparable to rates at other institutions nationwide. However, there is little comfort in being comparable in this context, Busch-Armendariz said. In fact, the CLASE survey is intended to do more than report prevalence – it is intended to provide greater insight into the dynamics of these incidents in order to drive meaningful change that leads to a reduction in incidents.

Across eight academic institutions and five health institutions (which enroll mostly graduate and professional students) key findings of the CLASE survey include:

“The CLASE study demonstrates a commitment to understanding the dynamics of sexual violence while the results portray the reality and impact it brings,” said Rose Luna, deputy director of the Texas Association Against Sexual Assault. “Sexual assault advocates have long contended with the misconceptions and the lack of survivor justice as a result. This research project will help bridge the gap of misinformation to positively affect outcomes for survivors, college campuses, and society as a whole.”

UT institutions already have numerous, well-established programs and services in place dedicated to preventing sexual assault and misconduct and responding to victims when an incident does occur. Every institution also proactively works to educate members of the campus community about the policies, procedures and resources related to victim support and the reporting of offenses, and each campus engages in a full array of training, awareness and prevention efforts.

Institutions are also diligent in ensuring justice and due process for those accused of sexual assault, misconduct or harassment, handling reports and investigations in a legal and appropriate manner that protects the rights of everyone involved.

The CLASE reports for each institution include a summary of existing programs as well as further commitments for action, based on the results of the survey.

“I am so pleased that the marvelous research capabilities of the University of Texas are being brought to bear on these issues,” said David L. Callender, M.D., president of UT Medical Branch in Galveston. “We hope that this research will take us far beyond a focus on Title IX compliance to new understanding and meaningful actions that reduce risky and inappropriate behaviors.”

Looking forward, additional research will be conducted, including an in-depth empirical investigation at all UT institutions and the four-year longitudinal study at UT Austin, which includes 1,300 students who are freshmen this academic year.

← A. Didar Singh named IC² Fellow Why blog? Why dialogue? Why collaborate? →