The IC² Institute is pleased to announce the newest IC² Fellow, A. Didar Singh. IC² recognizes his critical role in strengthening ties between the IC² Institute and Indian institutions and as an advocate for new and expanded collaborations between The University of Texas at Austin and India. 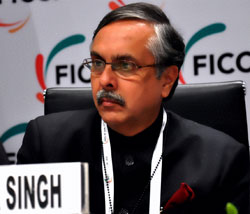 A. Didar Singh is the Secretary General of Federation of Indian Chambers of Commerce and Industry (FICCI). FICCI is India’s largest and oldest apex business organization, articulating the views of over 250,000 companies with policy makers, and providing a platform for consensus building within industry sectors and between industry, government and society. In his current role, Dr. Singh leads FICCI where he overseas over eighty sectoral verticals and helps articulate the views and concerns of industry.

Dr. Singh’s dynamic guidance helped the DST-Lockheed Martin Indian Innovation Growth Programme, in which IC² is a founding partner, scale up to new heights. The Programme has generated an economic impact of over $800 million and benefited more than 1,000 Indian scientists, engineers, inventors and entrepreneurs across virtually every technology sector.

Under Dr. Singh’s visionary leadership, FICCI and IC² signed an agreement with the State Government of Andhra Pradesh to set up Xlr8 AP, a world-class technology accelerator in Tirupati. The accelerator leverages the best practices of the Austin Technology Incubator and over a decade of IC²’s experience working with Indian entrepreneurial community through the India Innovation Growth Programme.

Due to his efforts, the U.S. Embassy in India, FICCI and the IC² Institute have also partnered to set up Nexus, a world-class technology and business incubator program at the American Center in the heart of New Delhi. Nexus will incubate up to 30 enterprises annually as well as international business development support for selected companies. The U.S. Embassy will provide space within its American Center Library, two full-time managers to run the incubator, and funds to employ an incubation expert in-residence from the IC² Institute.

It was Dr. Singh’s foresightedness that led FICCI and IC² to jointly design an exclusive program with Indian Council of Medical Research (ICMR) to commercialize technologies developed by ICMR in Indian and global markets.

Dr. Singh is a renowned author and former civil servant of the Indian Administrative Service (IAS) and took over as Secretary General of FICCI from November 2012. He retired as Secretary to Government of India in the Ministry of Overseas Indian Affairs (2009-11). During his time in government, he also worked in the Ministry of Science and Technology dealing with commercialization of new technologies and later as member of several boards of state-owned enterprises where he was instrumental in ensuring technological initiatives for growth and sustainability of these enterprises.