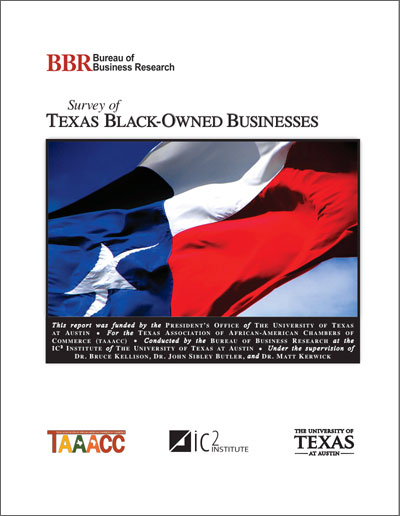 The number of black-owned businesses in Texas is growing but the firms remain small in comparison to other Texas businesses, and their owners perceive significant barriers to growth and profitability, according to a new report from the Bureau of Business Research at The University of Texas at Austin.

In their survey responses, a majority of black business owners indicated they felt they had the education and skills needed to succeed. They saw room for improvement in the areas of political access and contracting opportunities.

A majority of those surveyed (76 percent) said they perceive black-owned businesses to have less access than other firms to government decision makers who influence procurement opportunities. A majority of survey respondents also believed that black-owned businesses were unfairly excluded from taking part in contracting opportunities with government (63 percent) and the private sector (70 percent).

“The survey showed a strong need among black business owners for more financial training and increased access to working capital,” said report co-author Dr. Bruce Kellison of the Bureau of Business Research. “Many of our survey respondents have businesses in the service sector, a growing segment of the state and national economy. But their firms have difficulty scaling and remain smaller than the average Texas business. As a state, we must work together to address their needs for financial training, better access to capital, and increased contracting opportunities, all of which appear to be constraining this growing and vital part of our economy.”

“We are grateful to the Texas Association of African American Chambers of Commerce for collaborating with us on this important survey,” said university President Bill Powers. “A better understanding of the obstacles faced by black business owners will help the association, and all of us across the state, formulate strategies to create a healthier economy for all Texans.”

The Bureau of Business Research, part of the IC² Institute at The University of Texas at Austin, surveyed 914 black-owned businesses across the state. Additional survey findings dealt with:

The report was authored by Bruce Kellison, Matt Kammer-Kerwick, and John Sibley Butler of the IC² Institute, in collaboration with the Texas Association of African American Chambers of Commerce (TAAACC). It was released on June 19, 2014, in a press conference on the steps of the Texas Capitol attended by State Senator Royce West and UT Austin President Bill Powers.

In 2012, the Bureau of Business Research published a similar report on the state of Hispanic-owned businesses in Texas. 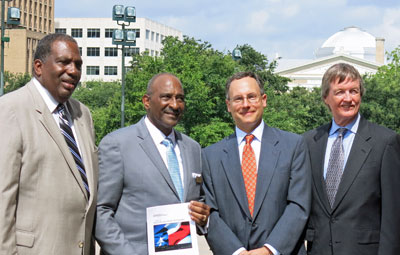 Left to right: State Sen. Royce West; Jim Wyatt, Chairman of the Texas Association of African American Chambers of Commerce; Bruce Kellison, co-author of the study and Associate Director of the Bureau of Business Research; Bill Powers, President of The University of Texas at Austin. Photo by Coral Franke.