On November 21, 2014, Nathalie Cely, the Ecuadorian Ambassador to the United States, visited the IC² Institute. The purpose of the visit was to learn about an eight-year program proposed by the IC² Institute to develop an innovation ecosystem in Ecuador. The visit was also intended to present a broad array of possible future collaborative efforts between the university and Ecuador, through an extended panel discussion with a range of experts at UT Austin. The IC² Institute’s proposal is designed to support Ecuadorian President Rafael Correa’s goal to accelerate his country’s production matrix from raw materials to high value finished products, titled the Realignment of Production Matrix.

Ambassador Cely’s visit also provided an opportunity to introduce her to a wealth of resources available on the UT Austin campus. She met with Dr. Charles Hale at the Teresa Lozano Long Institute of Latin American Studies (LLILAS), and had an opportunity to visit the Texas Advanced Computing Center’s Vizlab. The tour of Vizlab was conducted in Spanish by Luis Francisco-Revilla of TACC.

During a student meet and greet, the Ambassador charmed everyone with her highly interactive and personal approach. Ecuadorian students attending UT Austin and other students, primarily from the LBJ School of Public Affairs, had an opportunity to interact with the Ambassador. Each side asked questions on topics ranging from the challenges of adapting to life in Austin, areas of students’ studies and their plans following graduation, to the Ambassador’s background and typical activities. The students’ overwhelming response, when asked what best helped them make friends and fit into Austin’s culture, was “soccer.” The student portion of the program concluded with an opportunity to network among themselves.

The visit concluded with an extended panel discussion that included experts from across campus in energy policy, clean-energy technologies and petroleum/geosciences. Commercialization leaders from the City of Austin and the IC² Institute’s Austin Technology Incubator, Global Commercialization Group, and Bureau of Business Research also participated and were able to link current research and global programs with the commercial goals of emerging economies. 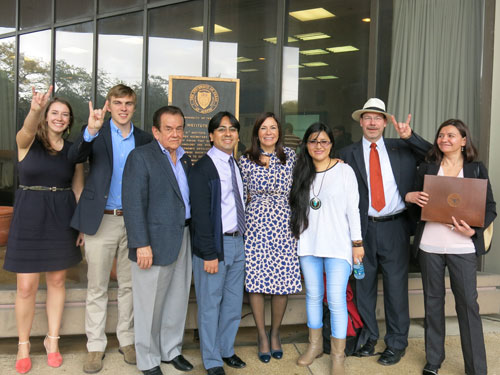 Ambassador Cely, fourth from right, poses with students and others at the IC² Institute. Photo: Coral Franke