The Austin Technology Incubator (ATI), part of the IC² Institute at The University of Texas at Austin, has recognized a veteran entrepreneur and a renowned faculty member with a pair of awards that recognize their accomplishment and contributions to the technology community.

The awards were made at a joint graduation and 25th anniversary celebration last night for ATI, which works with seed and pre-seed-stage companies, helping prepare these businesses for commercial success, with a particular focus on helping startups compete in the capital markets.

At IBM, Saxena has directed the operational and strategic initiatives to commercialize industry solutions based on the IBM’s transformative Watson technology. Saxena holds two U.S. software patents and has received numerous business awards including Entrepreneur of the Year, IT Technologist of the Year, and the Distinguished Alumni Award from Michigan State University from where he received his MBA in 1991.

Saxena joins an esteemed cohort of past Kilcrease award winners, including Pike Powers, Lee Walker, Michael Dell and, most recently, Gary Farmer. First awarded in 1998, the Kilcrease Award is given to business leaders in recognition of their contributions to the Austin community. The award is named for Laura J. Kilcrease, founding director of the Austin Technology Incubator and current Venture Partner at Triton Ventures, who has dedicated her career to advancing Austin’s tech economy.

“Manoj is one of our favorite ATI success stories, for sure,” said Laura Kilcrease, ATI’s first director and Venture Partner at Triton Ventures. “He prevailed in starting successful technology companies twice, stayed with IBM after an acquisition sharing his immense intellect there. But it is the time he finds to give back, especially though his own Family Foundation, that I find most inspiring. I am so proud he is one of the Civic Entrepreneurship Award winners.”

Michael Webber was a Longhorn from the start, graduating from The University of Texas with a double major in Aerospace Engineering and Plan II Liberal Arts and serving as drum major of the Longhorn marching band. He went on to earn his M.S. and Ph.D. in Mechanical Engineering from Stanford where he was also a National Science Foundation Fellow from 1995 to 1998. 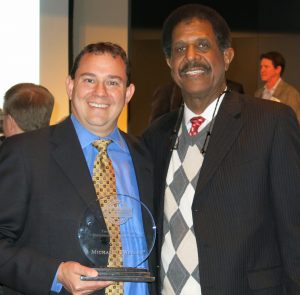 Dr. Webber returned to UT in 2006, and now serves as Deputy Director of the Energy Institute and Associate Director of the Center for International Energy and Environmental Policy in the Jackson School of Geosciences. He is also a Fellow of the Strauss Center for International Security and Law at the LBJ School of Public Affairs and an Associate Professor of Mechanical Engineering. Additionally, Dr. Webber helped establish, and is now co-director of ATI’s Clean Energy Incubator, one of the world’s first clean tech-focused incubators.

“I was so very honored and humbled to have an award named after me, and there is no better first recipient than Michael who has made all of us Longhorns so proud,” said Dr. John Sibley Butler, IC² Research Fellow and director of the Herb Kelleher Center for Entrepreneurship at McCombs School of Business. “My passion is blending academics and entrepreneurship, helping young companies develop from the earliest stage to long-term growth businesses. That’s Michael’s passion too, and the list of those positively impacted by him over the years is long and growing.”

The 25th anniversary event included the graduation of 25 ATI portfolio companies. It was made possible through contributions from AT&T, HPI, IBM, Norton Rose Fulbright and Pike Powers Lab.

The Austin Technology Incubator (ATI) is the startup incubator of the IC² Institute of The University of Texas at Austin. It has operated since 1989 with a dual mission: create jobs and wealth in Central Texas through technology entrepreneurship, and provide distinctive teaching and research opportunities to the UT-Austin community. Over the past 10 years, ATI companies have created more than 5,500 jobs, nearly $1 billion in economic impact, and over $20 million in tax revenues in Central Texas.