Student entrepreneurs launch nonprofit to provide telepsychiatry for the homeless

The University of Texas at San Antonio undergrads found a unique way to marry these selfless missions. They are launching a nonprofit to provide psychiatric therapy sessions to homeless individuals in Austin and San Antonio through videoconferencing with licensed mental health providers.

VideoMed was the direct result of a University of Texas System-funded program to promote student entrepreneurship. Known as the Student Entrepreneurship Fellowship (SEF), the six-week summer course focused on teaching students from the System’s eight academic campuses the entrepreneurial and business skills needed to form a successful company. The course was hosted by the IC² Institute in June and July.

SEF was developed by the National Science Foundation’s Innovation Corps (I-Corps) program’s Southwest Node at UT Austin and funded by the UT System’s Entrepreneurship Network, which provides hands-on training for college students to launch their own companies. 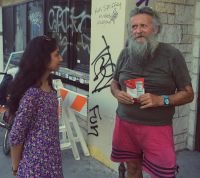 “It’s never too early to train and support students with great ideas that could lead to successful companies,” said Carlos Kemeny, assistant director of UT System’s Office of Technology Commercialization. “The SEF program teaches students the nuts and bolts of starting a company from concept to profits.”

Forty undergraduates, including Patel and Ahmad, were competitively selected to participate in the SEF course. They learned a variety of entrepreneurial skills such as pitching ideas to investors, achieving sustained funding, intellectual property, revenue model development, partnership building, finance, marketing and international business.

Students were also required launch a startup. In doing so, they had to interview at least 100 people to help them flesh out their business models around initial ideas, adjust their strategies based on customer feedback and present their potential companies to a panel of judges—which included a Silicon Valley investor—at the course’s conclusion­­.

“Traditionally, graduate students are taught entrepreneurship and technology commercialization, which is the I-Corps program’s core,” said Heath Naquin, executive director of the I-Corps Southwest Node. “SEF applies I-Corps program lessons to undergraduates with the belief that such skillsets will make a larger impact over time if taught before the graduate level.”

For Patel and Ahmad, entrepreneurship is a vehicle to achieving their goal of providing better access to mental health for more than 600,000 homeless Americans.

“VideoMed will become a nonprofit dedicated to providing homeless individuals with the opportunity to speak to mental health professionals through videoconferencing sites established at homeless shelters, churches and libraries,” Patel said.

The sophomores—who are both enrolled in a B.S./M.D. dual admissions program known as Facilitated Acceptance to Medical Education (FAME) to earn their degrees at UTSA and UT Health Science Center at San Antonio’s School of Medicine at in seven years—said they’re motivated to help the homeless with technology because mental illness is a major impediment for the homeless to secure employment, which in turn will help get them off the streets.

“We hope to alleviate the impact mental illnesses on the homeless and society,” Ahmad said. “Although it’s easy to ignore them on the streets, it costs society more than $25 billion a year to provide services to the homeless, according to the U.S. Department of Housing and Urban Development. We’d like to help such individuals abate their psychological conditions to once again become productive members of society.”

Mitchell Gibbs, executive director of Front Steps, a nonprofit that operates Austin’s emergency homeless shelters among other things, said there is a huge need to provide mental health services for the homeless who face many hurdles to obtaining them.

“We will see some amazing opportunities that can come out of this offering (VideoMed), which is going to make a difference in people’s lives,” said Gibbs, who is in discussions with VideoMed to provide homeless clients. “The students are ambitious. They seem to have not just their heads, but their hearts in the right place.”

VideoMed plans to obtain its nonprofit status in the near future, establish partnerships with other nonprofits that support the homeless, recruit mental health providers, seek funding from donors and organizations and apply for grants. 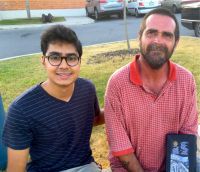 Patel and Ahmad estimate it will cost less than $100,000 to launch pilot programs in Austin and San Antonio in the next two years; that if successful, will be incorporated in other cities throughout Texas and the nation. VideoMed won first place among companies started by UT System students in the SEF program, earning the pair $3,000 to jumpstart their nonprofit.

The students said they’ll need to hire about three licensed mental health providers—mainly psychiatrists and advanced-practice registered nurses—to launch the program. The providers will be reimbursed at competitive rates.

“We hope to raise capital from donations, but a large portion of our funding will come from grants,” Patel said. “Grants can come in varying amounts, ranging from a couple thousand dollars to a million. However, a good amount of homeless individuals have some form of health insurance such as Medicare, Medicaid, or municipal cards, which can help subsidize their telepsychiatry services.”

The students plan to recruit mental health providers through presentations at medical organizations, such as county medical societies.

“Providers, patients and nonprofits have already expressed an interest in participating,” Ahmad said. “I believe there are many actionable issues in health care—such as homeless mental health—that as a society, we not only have the ability, but the obligation to solve. VideoMed is a hypothesis aiming to fulfill that obligation.”

← BBR to take part in 13-campus study of sexual assault in higher education Opinion: The untold risk in monetary policy →