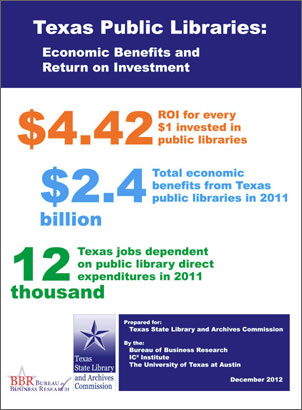 In 2011 Texas public libraries collectively were found to provide $2.407 billion in benefits while costing less than $0.545 billion, a return on investment of $4.42 for each dollar invested, according to a study released in December, 2012 by the Bureau of Business Research.

The analysis was prepared by the Bureau of Business Research (BBR) for the Texas State Library and Archives Commission (TSLAC).

Two quantitative analyses were conducted. One examined Texas public libraries as business and organizational entities and concluded that libraries produced $1.043 billion in local economic activity. The second major analysis examined the value of key library activities: circulation of books and other media, access to public computers and the Internet, educational programs, and other services. The BBR research estimated these services, when taken together, as generating $1.364 billion. Combined, the total economic benefit to the state was $2.407 billion in 2011.

Because many economic benefits could not be estimated, the research team developed case studies to capture specific libraries’ activities with business organizations and assistance to self-employed individuals, small businesses, entrepreneurs, and employers. Many of the profiled libraries played a significant role for job seekers, job training, and workforce development. Others showed creative service approaches and collaborations with local Chambers of Commerce. Together, the case studies documented a number of widespread, unmeasured economic impacts of public libraries of all sizes in Texas.

“The conservative methodology we employed in the study, measuring business impacts and the value of library services, yielded an ROI figure ($4.42 for every $1 invested) that we believe is on the lower end of a range. Some services that libraries provide, such as the value of private tutoring in libraries, the economic benefits of library-based training programs, and the use of materials within a library cannot be quantified easily although they are readily apparent to everyone” said Dr. James Jarrett, the study’s principal investigator.

For more information about the study, contact Dr. James Jarrett at the Bureau of Business Research: jj@ic2.utexas.edu